You are here:
Crime Scene Bureau

On October 23, 2006, the Essex County Prosecutor’s Office unveiled its new state of the art 2.5 million dollar Crime Scene facility. The facility consists of a 15,000 square foot building designed to enhance the collection, processing and packaging of forensic evidence in Essex County. The facility includes a vehicle processing room equipped with a hydraulic lift which allows the Crime Scene Detectives to examine vehicles from all angles; a forensic processing room designed to better enable a Detective to locate and identify fingerprints on various types of evidence; a drying chamber room designed for the processing and packaging of blood soaked clothing; a digital photography room, as well as a new large evidence storage room capable of handling more than 50 times the amount of evidence which could be stored at the previous facility.

The Crime Scene Unit enables the Detective staff to access the Internet via a high speed computer system thus allowing for instant communications with all law enforcement agencies. The computer system also features a 3-D animated Crime Scene Sketch and Reconstruction software to which allows the Detectives the ability to visually reconstruct a crime scene. Also, the Unit utilizes three fully stocked field vehicles for processing evidence at any crime scene. These vehicles are equipped with portable lighting systems, and alternate light sources which enable the Detectives to view bodily fluids, hairs, fibers and latent fingerprints invisible to the human eye under natural light. 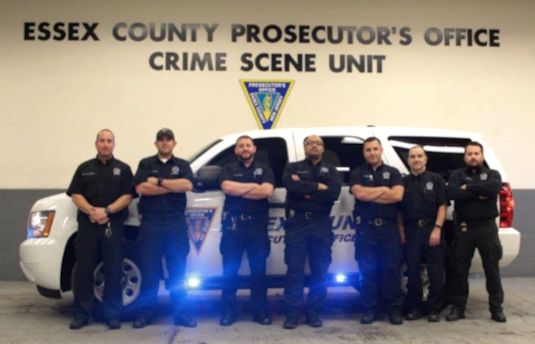 In December 2010, the Essex County Prosecutor’s Office formed a Cyber Crimes Unit to investigate child pornography, computer fraud and the use of the Internet and other technology in crimes. This unit is staffed by an Assistant Prosecutor, a Lieutenant of Detectives, and several Detectives. The Unit works with local, state and federal law enforcement agencies, and provides a valuable local resource given that many local police departments don’t have the facilities and expertise to thoroughly investigate computer related matters.

In 2012, the Cyber Crimes Unit expanded its mission to include assisting the [ahref-post id=”2715″]Megan’s Law Unit[ahref-post-end] in obtaining necessary evidence that registered sexual offenders were utilizing the Internet and social media in violation of the terms of their Community or Parole Supervision for Life. The Cyber Crimes Unit’s forensic abilities continued to grow as it secured additional forensic devices and software. As a direct result of additional resources, the CCU enhanced its ability to conduct in-house examinations.

In 2015, the Cyber Crimes Unit became a part of the newly created Forensic Analysis and Cyber Technical Services (FACTS) Unit which is staffed by six detectives, a Lieutenant and a Captain.