Acting Essex County Prosecutor Carolyn A. Murray announced today that an Essex County jury has convicted Khaalid Fate, 37, of Newark of two counts of aggravated assault on a police officer following a trial before the Honorable Sherry Hutchins-Henderson, Judge of the Superior Court.

According to Assistant Prosecutor Roger Imhof, who tried the case, at approximately 7:30 p.m. on Nov. 20, 2011 the two men were spotted in a 2001 Dodge Caravan that had been reported stolen in Kearny. There was an anti-theft tracking device in the car which enabled the officers to recognize it as the stolen vehicle.

When officers attempted to pull the van over, Fate took the police on a high-speed chase through the city streets of Newark. On at least four occasions, Fate shot at the officers from the van window as they were pursuing him. Officers were eventually able to capture the two and make an arrest.

“These defendants showed a blatant disregard for the safety and well-being of the Newark police officers and others in the vicinity of this chase,’’ said Assistant Prosecutor Imhof. “Yet, the officers demonstrated the utmost valor, dedication and professionalism. Never once did they discharge their weapons during this incident. This guilty verdict ensures that defendant Fate will not be a danger to law enforcement or the community for a very long time.’’

He was acquitted of the more serious charge of attempted murder of a police officer.

In a subsequent and separate trial today Fate was also found guilty of being a felon in possession of weapon.

Both men have prior records. Fate has eight prior arrests and three prior felony convictions for conspiracy to commit robbery, possession of drugs with intent to distribute within 1,000 feet of a school and weapons offenses. Fate spent over 10 years in New Jersey State Prison.

Jones spent 17 years in New Jersey State Prison after being convicted of aggravated manslaughter in February 1990.

When Fate is sentenced he faces 20 to 40 years in New Jersey state prison because of his prior record. Sentencing for Fate is scheduled for Dec. 16 before Judge Hutchins-Henderson. Bail was revoked for both men. They are both currently being held at the Essex County Correctional Facility in Newark. 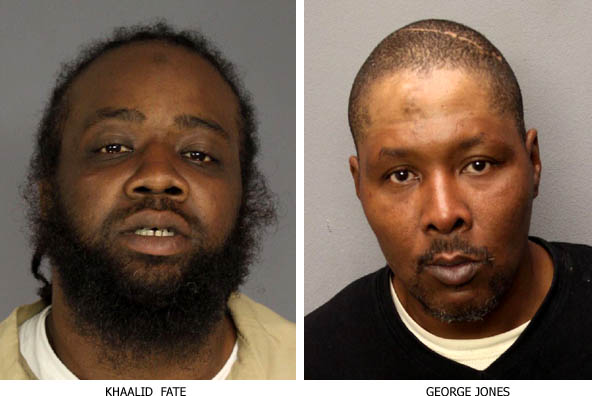