Aimed at raising awareness of the serious consequences carjackers face, the campaign will include billboards, bus placards and flyers. The message is that carjacking is a serious crime and those who engage in carjacking face severe consequences.

“Carjacking is not the same as taking a stolen car for a joyride,” said Prosecutor Murray. “When you pull out a gun and demand someone’s vehicle that is a serious crime and the penalties are severe if you are convicted. We want to send that message to young people who sometimes seem to view carjacking as nothing more than a theft.”

These billboards are now located in Newark at: 4th Avenue and Broadway; 61 Pennsylvania Avenue at the intersection of Parkhurst; and 97 Sussex Avenue.

In the 1990s, Essex County led the nation in car theft. With advances in technology, more and more vehicles are equipped with sophisticated anti-theft devices, making it almost impossible for an amateur to steal an unattended car. As a result, carjackings of attended vehicles have been on the rise in Essex County.

For example, in 2009, Essex County had just over 200 carjackings. Every year that number has continued to climb. Recently, there have been more than 400 carjackings per year. These crimes occur in the early morning hours and late at night. Sometimes they involve high-end cars, but very often modestly priced vehicles are targeted.

In response to the increase in incidents, a Carjacking Task Force was set up in 2010 by the U.S. Attorney Paul Fishman and then Acting Essex County Prosecutor Robert Laurino. Since that time the Essex County Prosecutor’s Office has worked cooperatively with the U.S. Attorney’s Office; the Federal Bureau of Investigation; U.S. Immigration and Customs Enforcement (ICE) Homeland Security Investigations (HIS); the Newark Police Department; the U.S. Immigration and Customs Enforcement; the Bureau of Alcohol, Tobacco, Firearms and Explosives; the Drug Enforcement Administration; the New Jersey Attorney General’s Office; the New Jersey State Police; and the Essex County Sheriff’s Office.

Starting Aug. 1, East Orange, Belleville and Irvington Police Departments became a part of this initiative. Each department has sent officers to serve on the Carjacking Task Force. In addition, the Essex County Prosecutor’s Office continues to maintain a Special Prosecutions Unit. Three assistant prosecutors are assigned to that unit. It was established to seek swift justice in these cases.

“We are encouraged by this partnership of federal, state and local law enforcement to combat carjacking in our communities,” Murray said. “Our goal is to let carjackers know that we take these crimes very seriously and that the penalties they will face are considerable.”

“In addition to putting would-be criminals on notice, we want to alert the public to be cautious,” Prosecutor Murray said. “Don’t leave the keys in your car even to run in and drop the baby off at the babysitter’s. Don’t leave your doors unlocked as you drive around. Be alert. Be smart,” she added. 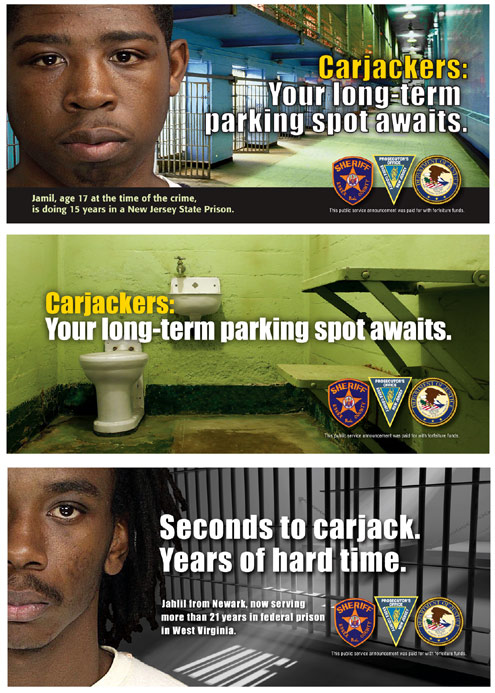