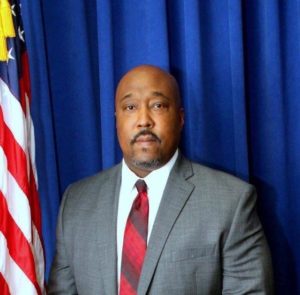 Chief McGuire was formally sworn in on February 26, 2018 and officially assumed the duties of Chief on March 1, 2018.

Chief McGuire came to the ECPO in January of 2011 after a lengthy career in the Financial Services Sector in IT Network Architecture and Engineering. He was hired to help create a Cyber Crimes Unit.

Chief McGuire also served as the County IT Manager on an interim basis. Prior to his promotion to Chief, Chief McGuire was the Commanding Officer of the ECPO Crime Scene Unit, FACTS Unit and Special Prosecutions Unit.

Chief McGuire was born and raised in Newark. A former U.S. Marine, he is a graduate of the Essex County Police Academy and is a former Deputy Sheriff’s Officer. Chief McGuire attended Morehouse College in Atlanta, Georgia and he is continuing his studies at Fairleigh Dickinson University in Madison, New Jersey.